There’s a lot of fun, new energy around Berkeley this spring with new coach Justin Wilcox. But Wilcox, considered one of the brightest defensive minds in the game, is about to start a complete overhaul.

Wilcox made one of the best assistant hires on the west coast when he brought former Eastern Washington coach Beau Baldwin onto his staff. Baldwin’s offenses had a habit of torching Pac-12 defenses when he was with the Eagles (you might remember a certain FCS quarterback named Vernon Adams) and he should be able to find creative ways to score even as the Bears rebuild their roster. Still, there are tons of questions. For starters, no quarterback on the roster attempted a pass last year.

How quickly can Jim Leavitt & Co. improve the defense?

The Ducks are due for a big step forward in 2017, and that would be the case regardless of who was head coach. Royce Freeman (168 carries for 945 yards and nine touchdowns), one of the most under appreciated running backs in the country, returns, as does quarterback Justin Herbert (162-of-255 passing for 1,936 yards, 19 touchdowns and just four interceptions). They are probably both thrilled to be working behind an experienced line (four of Oregon’s five offensive linemen starters were redshirt freshmen last year).

But the major problems were on defense, where the Ducks were flat out pitiful, giving up 518.4 yards and 41.4 points per game to opponents last year (the second stat ranks 126th in the nation). Enter Jim Leavitt, the defensive coordinator whom Willie Taggart plucked away from Colorado. The Buffs’ defense was one of the best in the Pac-12 last year, giving up just 342.5 yards per game, but that came at least in part because of an experienced group. Every position needs improvement, and the run defense is the most glaring problem. Oregon gave up an average of 246.5 rushing yards per game last season, and were sliced and diced on the ground by teams they had owned in recent years like Washington (378 rushing yards for the Huskies) and Oregon State (316).

Who emerges as the top quarterback?

Gary Andersen’s second year in Corvallis was a big improvement from his first, with Oregon State winning four games and, more importantly, being competitive in every one of them, (save for that 41-7 Colorado disaster). Quarterback was a revolving door last year because of injury, though, and there are still questions at that position.

Darell Garretson (73-of-146 for 617 yards, three touchdowns and four interceptions) was lost for the season in a mid-October loss to Utah, which moved Marcus McMaryion into the starting role. McMaryion (101-of-170 for 1,286 yards, 10 touchdowns and five interceptions) led OSU to its first win over Oregon in eight years, which would seem to give him the leg up. Heck, walk-on Connor Blount even played significant snaps when McMaryion was banged up, completing 19-of-35 touchdowns for 183 yards, no touchdowns and two picks. But the Beavers signed a junior college All-American quarterback, Jake Luton, who some believe is the future of the program. The three main guys are all back at practice, even though Garretson has been somewhat limited. No matter who winds up taking snaps, he can rest easy knowing that running back Ryan Nall (147 carries for 951 yards and 13 touchdowns) is behind him.

The headline in the Mercury News in mid-January said it best: “Stanford’s vanishing quarterback depth: Keller Chryst out at least six months, Ryan Burns to transfer.”

As it turns out, Burns decided not to transfer, so he’s currently splitting snaps with freshman K.J. Costello. Still, this is a hardly a model of depth. In the interest of safety, David Shaw might want to wrap those quarterbacks in bubble wrap throughout spring practice. Freshman Davis Mills will join the party this summer, right about the time Chryst should be getting cleared (Shaw expects Chryst to participate in fall camp).

But how much can Burns improve in the off-season? He started the first seven games of the season, completing 102-of-167 passes for 1,151 with five touchdowns and seven interceptions before Chryst took the reins. It’s Chryst’s job, even if he’s temporarily sidelined. But to survive in this league you need at least two healthy quarterbacks, and possibly three. While the Cardinal figure out their depth chart, Stanford will need other players—like running back Bryce Love, who rushed 111 times last season for 783 yards and now takes over for Christian McCaffrey—to prove they’re ready to carry a heavy load this fall.

How do the Huskies replace multiple playmakers on both sides of the ball?

Let us first count the important playmakers that UW bid farewell to: Receiver John Ross, safety Budda Baker, defensive tackle Elijah Qualls, cornerbacks Sidney Jones and Kevin King and outside linebacker Joe Mathis. Replacing them will be no easy task, but you’d be wise to trust in Christ Petersen.

The Huskies will be in good shape offensively, with QB Jake Browning (243-of-391 passing for 3,430 yards, 43 touchdowns and just nine interceptions) and running back Myles Gaskin (237 carries for 1,373 yards and 10 touchdowns) returning. They’ll miss Ross burning secondaries, no doubt, but his departure presents a chance for someone else to emerge—like Dante Pettis, who finished with 53 catches for 822 yards and 15 touchdowns. While the defense will miss big chunks of its production, Petersen got some good news in January when defensive end Vita Vea (five sacks in 2016) said he’d be back in 2017. UW also returns interceptions leader Taylor Rapp, a budding star.

Can Tavares Martin Jr. emerge as the conference’s best receiver?

The only sure thing in Mike Leach’s Air Raid offense is that pass catchers are going to get a lot of opportunities. That means there will be lots of balls thrown to Tavares Martin Jr., who was the Cougars’ second-best receiver, statistically, in 2016. Martin Jr. finished the season with 64 catches for 728 yards and seven touchdowns, though it was his now-departed teammates, Gabe Marks and River Cracraft, who were known for their big-play ability. Martin Jr. will have his chance to prove he can be the guy this season, and he’ll be working with a veteran quarterback in Luke Falk (443-of-633 for 4,468 yards, 38 touchdowns and 11 interceptions), which makes everything easier. 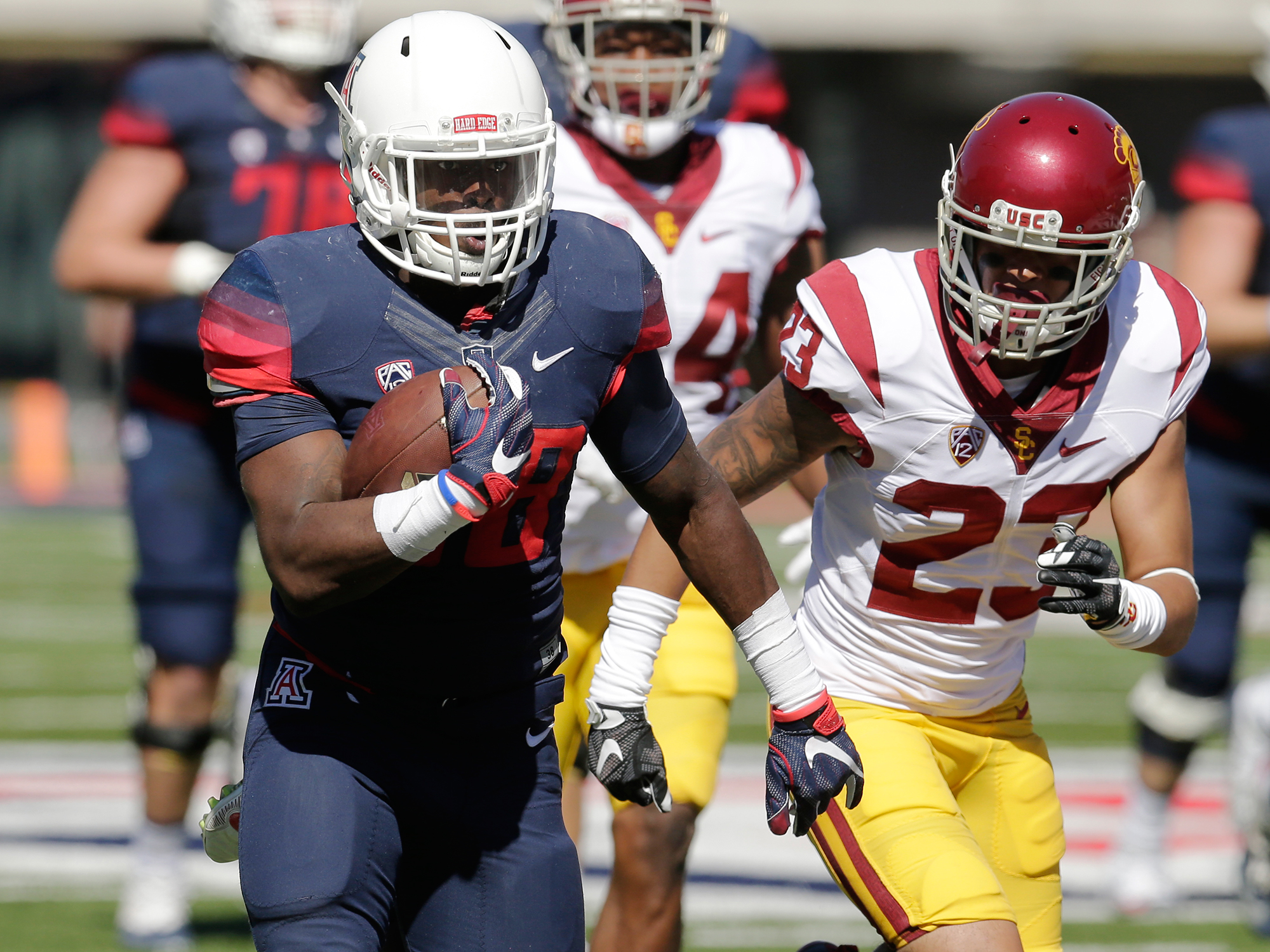 When healthy, the 5’10”, 199-pounder is one of the best backs in the league. Unfortunately, he has a long history of being sidelined with a variety of injury issues.

When Rich Rodriguez announced in mid-October that Wilson had hurt his knee and would miss significant time, SB Nation’s AZDesertSwarm.com reported that Wilson had left early or missed the game in 13 of Arizona’s last 15 contests. He finished 2016 with 320 yards and three touchdowns, putting his career total at 2,424 yards (on 425 carries) with 27 touchdowns. Wilson staying injury-free through spring, summer and into fall camp will go a long way in helping the Wildcats climb out of the Pac-12 South Cellar.

Which quarterback will rise to the top of the depth chart?

The Sun Devils had a miserable second half of the 2016 season, but they’ve got this going for them: They’re not short on quarterbacks. There are more than enough signal callers in Tempe, from Manny Wilkins to Brady White to Dillon Sterling-Cole to Alabama transfer Blake Barnett.

Will Barnett have an advantage considering ASU’s new offensive coordinator is the former receivers coach at Alabama? Maybe, but Wilkins was the best QB, statistically, from 2016, and that won’t be forgotten soon. (Wilkins completed 63% of his passes compared to 51% for the other two.)

How do the Buffaloes replace everything they lost on defense?

New coordinator D.J. Eliot has his work cut out for him, as the Buffs lost eight defensive starters from a team that produced one of the best turnarounds in the country. Head coach Mike MacIntyre has a defensive background though, and will likely help ease the transition.

Two junior college transfers, 6’4, 280-pound defensive end Chris Mulumba (63 tackles, including nine for loss and four sacks in 10 games as a sophomore at Diablo Valley College) and 6’3”, 350-pound nose tackle Javier Edwards (No. 46 junior college prospect in the country according to Scout.com), will have to establish themselves early.

Are Josh Rosen and the Bruins really for real this time?

A healthy Rosen (1,915 passing yards after completing 137-of-231 attempts, good for 10 touchdowns and five interceptions in just six games) is a welcome sight to Jim Mora & Co., as is a healthy Kolton Miller, the Bruins’ right tackle who was lost for the season just five games into 2016 after a foot injury. That played a role in UCLA giving up 24 sacks, a stat that has plagued the program since back in the Brett Hundley days.

The Bruins’ offense sputtered accordingly without Rosen in 2016, and UCLA finished a dismal 4-8. Mora blew up his staff afterward, bringing in a new offensive coordinator, running backs coach, receivers coach and offensive line coach. As usual, UCLA does not lack for talent or athleticism. Besides the return of Rosen, keep your eye on the emergence of sophomore wideout Theo Howard, who came in with plenty of fanfare as a true freshman but underwhelmed, finishing with just 88 receiving yards on the season.

Can the Trojans live up to the hype this year?

You have probably heard that USC is back. Like, really back. Quarterback Sam Darnold, who completed 67.2% of his passes and threw for 3,086 yards and 31 touchdowns—including a 453-yard, 5-TD performance in the Rose Bowl—is back, and he’ll get plenty of Heisman Trophy love early. Though USC lost JuJu Smith-Schuster, they’ll return wideout Deontay Burnett, who caught 56 passes for 622 yards and seven touchdowns in 2016, including the game-tying touchdown in the Rose Bowl’s final minutes. Tailback Ronald Jones II recorded 1,082 rushing yards and 12 touchdowns last season, and he’s back, too.

Defensively the Trojans were the third best team in the Pac-12 last year, holding opponents to 367.2 yards per game (Washington was the leader at 316.9). USC returns seven defensive starters, headlined by All-American linebacker Cameron Smith (team-leading 83 sacks). As usual, USC has all the pieces it needs. The question, as always, is if the Trojans can get back to the glory days.

How do the Utes restock their lines?

Utah is typically one of the most physical teams in college football, and often underappreciated and underrated as a result. The Utes lost four starters on the offensive line, plus starting running back Joe Williams. They’ll also be breaking in a new offensive coordinator as Troy Taylor joins the staff after a stint at Eastern Washington.

As usual, Utah led the Pac-12 in sacks in 2016, recording 43. Lowell Lotulelei’s return will be huge for the Utes, but he’ll sit out spring because of injury. Utah will definitely miss the production of Hunter Dimick, who is the program’s all-time sacks leader, and notched 14.5 in 2016. The returning sacks leader is senior defensive tackle Filipo Mokofisi, who recorded five last season, but the Utes will need someone to replace Dimick’s numbers.