By on March 22, 2017Comments Off on Ex-UC football players freeze through Pro Day – Cincinnati.com 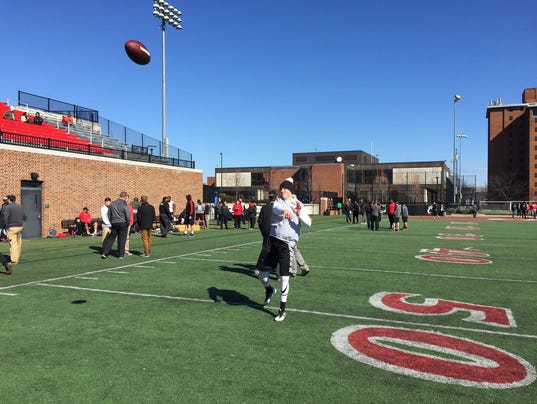 It was truly a day to separate the men from the pretenders.

Eric Wilson, a linebacker who led UC this past season with 129 tackles, sat in the warmth of UC’s Sheakley Athletics Center weight room for a post-workout interview with The Enquirer. Wilson (Redford, Mich.) was among 13 departing UC seniors who worked out.

“I started playing football, compared to other guys, kind of late,” Wilson said. “I started in the seventh grade, but from that point on I’ve loved football and I’ve done pretty much anything for the game. It would be a dream of mine to play in the NFL.”

Wilson and former UC free safety Michael Tyson (Norfolk, Va.) generally are considered the top 2017 draft prospects among ex-Bearcats. Tyson is rated the No. 14 free safety by CBS Sports’ NFLDraftScout.com website, and could land anywhere from the middle rounds to free agency. Wilson is the No. 17-rated inside linebacker, also a potential free agent.

Tyson was the only UC player invited to the recent NFL Combine in Indianapolis, where his respectable 40-yard dash time of  4.56 seconds was tied for ninth among safeties. Tyson led UC last season with five interceptions.

“The experience at the Combine was fun,” Tyson said. “Meeting and interacting with the other players, seeing what they know, and just getting the exposure was great.”

Tyson said he has been told that his draft stock is rising.

“As of right now I’m hearing mid-round, three through five,” Tyson said. “Maybe six, seven, or I could possibly slide up depending on how I do with private visits and things like that. This is my lifelong goal. I’d like to provide for my family and my son, and I just love the game of football.”

COLD ONE: The temperature was 31 degrees when former UC players began their outdoor workouts at the school’s practice field. With the Sheakley practice bubble having been taken down for the spring and summer, Wednesday saw players, scouts and spectators bundled up in coats, hats and long pants.

Most players stripped down to shirts, workout pants and cleats when they ran their 40-yard dashes. Some players even went shirtless during the sprints, trying to maximize their times.

“It’s been a long journey,” Kiel said. “I’m happy this time is finally here, it’s over and I don’t have to run a 40 again. It feels good to be done, come out here with these guys, my brothers again, one more time. Just trying to make our dreams come true.”

SHOWTIME: The group of former UC players working out also included some who have been more than a year out of college, including all-time Bearcats receptions leader Shaq Washington (Maple Heights, Ohio).

Washington, whose final UC season was in 2015, tried out last year for the San Diego Chargers. Washington set the UC career receptions mark with 240, and his jersey No. 19 was placed in the Nippert Stadium Ring of Honor in 2016.​

The list of players who worked out Wednesday, as provided by UC:

Get the latest UC sports news. Download the Bearcats app on both the Apple App Store and Google Play.

Ex-UC football players freeze through Pro Day – Cincinnati.com added by on March 22, 2017
View all posts by →