By on March 24, 2017Comments Off on Defense, domination and disappointment: Takeaways from first half of the Sweet 16 – Sports Illustrated

So Night One gave us the First Four of the Elite Eight, and we still have Night Two to go before we get the Other Four, and all of them will then play for the chance to reach the Final Four? Sweet!

If that makes your head spin, then you are in the proper frame of mind for the final stretch of March Madness. Here are a few thoughts on Thursday’s action, replay review included:

• I’m still deciding whether the Gonzaga-West Virginia tussle was the worst good game or the best awful game I’ve ever seen. It certainly was one of the more memorable ones. More than anything, the win demonstrated that Gonzaga, contrary to conventional wisdom, is a mentally tough team. The Zags actually handled the Mountaineers’ fullcourt pressure well (16 turnovers), but the real challenge in going up against West Virginia is the 40 minutes of relentlessness. The Zags were scrappy, and their defense, which many people don’t realize is currently ranked No. 1 in efficiency on KenPom, was at a championship level. A little luck never hurts, too. 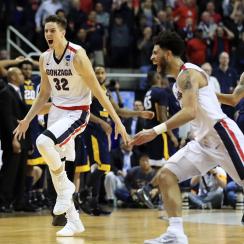 • Although if the Zags are going to get to Phoenix, they’re going to need a better offensive performance from point guard Nigel Williams-Goss. He was 2 for 10 from the floor and is now 12 for 42 (1 for 8 from three) in the first three games. On the season, Williams-Goss led the team with 16.7 points per game average on 50.4% shooting.

• We had a very lengthy and sticky replay review, which technically was against the rules. With 1:59 to play, the ball appeared to go out of bounds, and it was ruled Gonzaga’s ball. Because there was more than one player engaged on the play, the referees were required to go to the monitor to see if their call was correct. When they got there, they realized that the ball never actually went out of bounds. That, however, is not a reviewable play. Having discovered the error, the officials had to decide between doing what’s “legal” and what’s “right.” The refs ended up giving West Virginia the ball. So justice was served, but the rules were stretched, to say the least.

• Oregon sophomore guard Tyler Dorsey might be the best offensive player in the tournament (23.7 points per game on 66% shooting in three games), but the Ducks’ most valuable and important player Thursday night was Jordan Bell. The Ducks’ 6’9” junior forward had 16 points, 13 rebounds (four offensive) and two blocks. He also held Michigan forward Moritz Wagner, who was the hero of the win over Louisville with 26 points, to seven points on 3 for 10 shooting. Bell has had to play even heavier minutes since the Ducks lost backup center Chris Boucher in the Pac-12 tournament, and his overall excellence is a huge reason why they are still playing. Now you see why he was the captain of the SI.com All-Glue team.

• Although….It was very odd that Oregon had two fouls to give yet didn’t use them on Michigan’s final possession. Since there were fewer than 15 seconds on the clock, a couple of fouls could have pretty much ended the game. In the end, Derrick Walton Jr. got a pretty good look at a potential game-winning three. If that shot had gone in, there would be a lot of chatter this morning about Dana Altman’s poor defensive coaching down the stretch. But the shot misses, so we now sing Altman’s praises. See how this works?

• If you are defending Kansas, your primary weapon is hope. Because if the Jayhawks are not having an off shooting night, then they are darn near impossible to beat. Frank Mason came into their game against Purdue having shot just 3 for 11 from three in KU’s first two tourney games, so you knew he was due for a better game. He made 4 of 5 from behind the arc, Kansas shot 15 for 28 as a team, and the Jayhawks rolled from there. How’s this for a stat: Over the last 27 minutes, Kansas outscored Purdue 73 to 33. That is not a typo. And it’s not like Purdue is some crummy team, either. Kansas has gone over the 90-point mark in every NCAA tournament game so far.

• Here’s another reason to like Kansas moving forward: The way to beat a team like this is to slow it down and force an uncomfortable style. The only two teams remaining who have the ability to do that are Xavier and Butler. Oregon won’t do it, and neither will the other three teams playing in the South region tonight. So as far as I’m concerned, this championship is Kansas’s to lose.

• Xavier only had Myles Davis, a 6’2” senior guard who averaged 11 points per game last season, for three games because he was suspended the first two months and then quit the team in January. The Musketeers lost all three games he played in, and they dropped four out of five during that stretch. On Jan. 29, they lost their starting point guard and second-leading scorer, Edmond Sumner, to a season-ending ACL injury. Beginning Feb. 11, they lost six straight games. With just under eight minutes to go in a Big East tournament quarterfinal game, Xavier trailed Butler by seven points. The Musketeers came back to win by five. Had it lost that game, Xavier would likely have failed to qualify for the tournament. Now it is one game away from the Final Four. Everybody got all that?

• As for the win over Arizona Thursday night, it was yet another brilliant coaching clinic by Chris Mack. The Musketeers really stymied Arizona with their zone defenses—although they were sloppy on the defensive backboards, which is the risk you take when you play a zone. Xavier also got another terrific performance from 6’6” junior guard Trevon Bluiett, who eclipsed the 20-point mark for the third straight game in this tournament and finished with 25 points on 9 for 17 shooting. They only committed eight turnovers, had 14 assists on 28 made field goals, and got a stellar contribution off the bench from 6’10” junior forward Sean O’Mara (eight points, three rebounds in 21 minutes). And even though freshman point guard Quentin Goodin isn’t nearly the scorer Sumner was, he still runs the team pretty well (six assists and three turnovers) and is growing more comfortable every game. So this was a culture win if ever there was one.

• On the other hand, even though Arizona was in great position to win this game, the Wildcats’ zone offense was pretty awful most of the night. If it weren’t for those 14 offensive rebounds, the game might not have even been all that close. And it was positively inexcusable to have a dynamic offensive weapon like 7’0” freshman Lauri Markkanen and allow him to go the final 11 minutes without taking a shot. 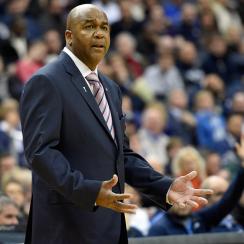 • Finally, a few words on what I’m sure will be a major point of discussion in the coming days—namely, another disappointing exit for Sean Miller short of the Final Four. This is the seventh time Miller has reached the Sweet 16 at Xavier and Arizona, and I’m guessing this is the most disappointing loss he has suffered. Take your pick for the reason why: It came against a No. 11 seed, against his former employer coached by his close friend, in a game in which his team led by eight points with 3:45 to play, in a year in which his team was paired against the consensus weakest of the No. 1 seeds.

Frankly, I find the whole thing rather tiresome. This is, after all, the same Sean Miller that had been held up for most of the season as a Coach of the Year candidate. The idea that a coach isn’t “successful” unless and until he reaches a Final Four is unfair. It is, however, the reality of the profession. And while I think the world of Miller as a coach, I do sometimes wonder if he is wound too tight, that maybe he wants that first Final Four so badly that it makes it tougher for his players to perform with free minds. You may have seen video of Mark Few’s answer to the inane question about whether he is hoping to get the proverbial monkey off his back by “finally” making the Final Four. Few made it clear he has never bought into that line of thinking. I fear that Miller has, and for a coach who drips with intensity during games when far less is at stake, that can be an issue. I’m guessing this loss might cause Miller to do some soul searching. His burning intensity has served him so well for so long, but perhaps it’s time to dial that back.

Defense, domination and disappointment: Takeaways from first half of the Sweet 16 – Sports Illustrated added by on March 24, 2017
View all posts by →