UK attacker had been in Saudi Arabia, embassy confirms – CBC.ca

By on March 25, 2017Comments Off on UK attacker had been in Saudi Arabia, embassy confirms – CBC.ca

The man who killed four people outside Britain’s Parliament was in Saudi Arabia three times and taught English there, the Middle Eastern country’s embassy said.

A Saudi Embassy statement released late Friday said that Khalid Masood taught English in Saudi Arabia from November 2005 to November 2006 and again from April 2008 to April 2009.

The embassy said that he had a work visa. It said he returned for six days in March 2015 on a trip booked through an approved travel agent. 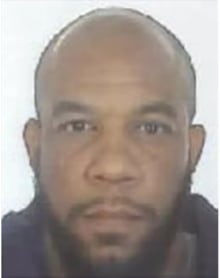 The Saudi embassy in London says Khalid Masood taught English in the country and was there three times, from November 2005 to November 2006, and again from April 2008 to April 2009. He returned for six days in March 2015. (London Metropolitan Police)

The Saudi Embassy said that he wasn’t tracked by the country’s security services and didn’t have a criminal record there.

Before taking the name Masood, he was known as Adrian Elms. He was known for having a violent temper in England and had been convicted at least twice for violent crimes.

Masood drove his rented SUV across the crowded Westminster Bridge on Wednesday, striking several pedestrians. He then jumped out and attacked police officer Keith Palmer, who was guarding Parliament, fatally stabbing him before being shot dead by police.

In all, he killed four people and left more than two dozen hospitalized, including some with what have been described as catastrophic injuries. The group Islamic State in Iraq and Syria (ISIS) claimed responsibility for the attack.

British officials said security at Parliament will be reviewed after new footage emerged that showed large gates to the complex were left open after Masood rushed onto the grounds.

There are concerns accomplices could have followed him in and killed more people. The footage shows pedestrians walking by the open gates and even a courier entering the grounds. 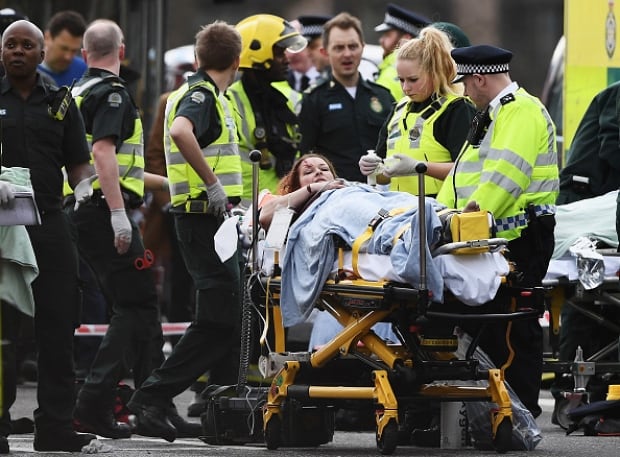 A woman is treated by emergency workers near Westminster Bridge after an assailant, who later fatally stabbed a police officer, used a car to mow down pedestrians on the bridge. (Carl Court/Getty Images)

The new footage follows the release of earlier video showing slight delays and confusion during the evacuation of Prime Minister Theresa May from Parliament as the attack unfolded.

Masood, who at 52 is considerably older than most extremists who carry out bloodshed in the West, had an arrest record dating to 1983. The violence came later, first in 2000 when he slashed a man across the face in a pub parking lot in a racially charged argument after drinking four pints, according to a newspaper account.

Hundreds of British police have been working to determine his motives and possible accomplices. Two people remain in custody for questioning. They are two men, aged 27 and 58, who were arrested in the central English city of Birmingham, where Masood was living. Authorities haven’t charged or identified the two men. Others who were arrested in connection with the investigation have been released. 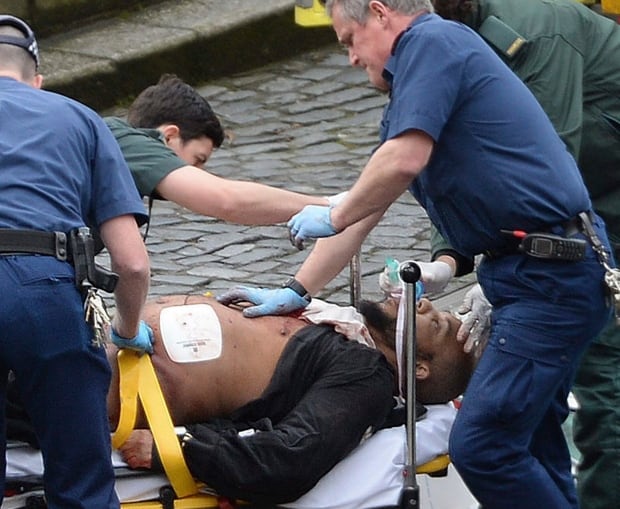 In this photo from Wednesday, Khalid Masood, identified as the attacker, is seen being treated by emergency services outside the Houses of Parliament in London. He later died from his injuries after being shot by police. (Stefan Rousseau/PA/Associated Press)

Details about how he became radicalized aren’t clear. His time in Saudi Arabia may provide clues. He was also jailed in Britain and may have become exposed to radical views while an inmate.

Masood’s last conviction was in 2003, also involving a knife attack. It’s not clear when he took the name Masood, suggesting a conversion to Islam.

UK attacker had been in Saudi Arabia, embassy confirms – CBC.ca

UK attacker had been in Saudi Arabia, embassy confirms – CBC.ca added by on March 25, 2017
View all posts by →