By on March 26, 2017Comments Off on The Breakthrough: Its Cinderella days long behind it, Gonzaga at last reaches Final Four – Sports Illustrated

SAN JOSE, Calif. — It could have been ephemeral. The Gonzaga phenomenon—now on the way to its first-ever Final Four—could have raged and faded in the span of two weeks of March 1999, as a No. 10 seed making its second-ever trip to the NCAA tournament. An upset of Minnesota, then No. 2 Stanford, then No. 5 Florida in the Sweet 16, with that classic Gus Johnson call after Casey Calvary’s tip in with 4.4 seconds left: “Shannon from the cornerrrr … and it’s over. Gonzaga! The slipper stillllll fits!” America’s new darlings were knocked out two days later, their final, errant shot a driving, double-clutch layup by star guard Matt Santangelo in the face of UConn’s front line in the Elite Eight. That off-season, their coach, Dan Monson, left Spokane for a major-conference job at Minnesota—and that is how most Cinderella stories end, with a coach leaving, and a program fading back into mid-major nowhere. But Mark Few, the then 36-year-old assistant who was promoted at Gonzaga, was insistent about one thing: “We didn’t want to be a one-hit wonder.”

What he built, at first, was a Cinderella story that repeated itself, with Sweet 16 runs in 2000 and 2001. But then the program morphed into something else altogether, something so omnipresent in March—with 19 straight trips to the NCAA tournament dating back to ’99—that what Gonzaga was doing stopped being regarded as a streak and started being regarded as a question mark. As in: Could Few and the Zags ever break through to the Final Four? They were a lethal scoring machine in 2006, but drowned in a puddle of Adam Morrison’s tears in the Sweet 16. They looked ready in 2013, as a No. 1 seed, only to run into a Wichita State blitzkrieg of three-pointers in the second round. They knocked on the door in 2015, only to be felled by eventual national champ Duke in the Elite Eight. Two years later, Few came into a season with perhaps his deepest, but least-gelled roster—three major-conference transfers, Nigel Williams-Goss (from Washington), Jordan Mathews (Cal) and Johnathan Williams III (from Missouri) needed to adapt to lesser roles—and built it into the team that started 29–0, and then pushed Gonzaga’s program into a new chapter: that of a powerhouse on the brink of a national championship.

On Saturday night at the SAP Center, in the postgame celebration of an 83–59, Elite Eight blowout of 11th-seeded Xavier, after all the other Zags had cut down their strands of net, Few climbed up and untied the remainder. He then turned his back on the rim, pivoting on the top step of the ladder so that he could face his team, assembled inside the arc below. Two days earlier, the 18th-year Gonzaga head coach denied the existence of a monkey—insisted that he did not live with one on his back, did not need to reach a Final Four to be vindicated, and his wife, Marcy, standing down there on the court, verified that this was true, that even privately, “he absolutely does not get caught up in that.”

But Few’s face, right then, belied how much he’d wanted it. The normally dour coach was, for the first time publicly in this 2017 NCAA tournament, beaming. He held the net he’d just untied in his right hand, with that arm outstretched, and he turned his left palm upward, for emphasis, as he yelled a message down to his players: “MIGHT AS WELL WIN IT!” 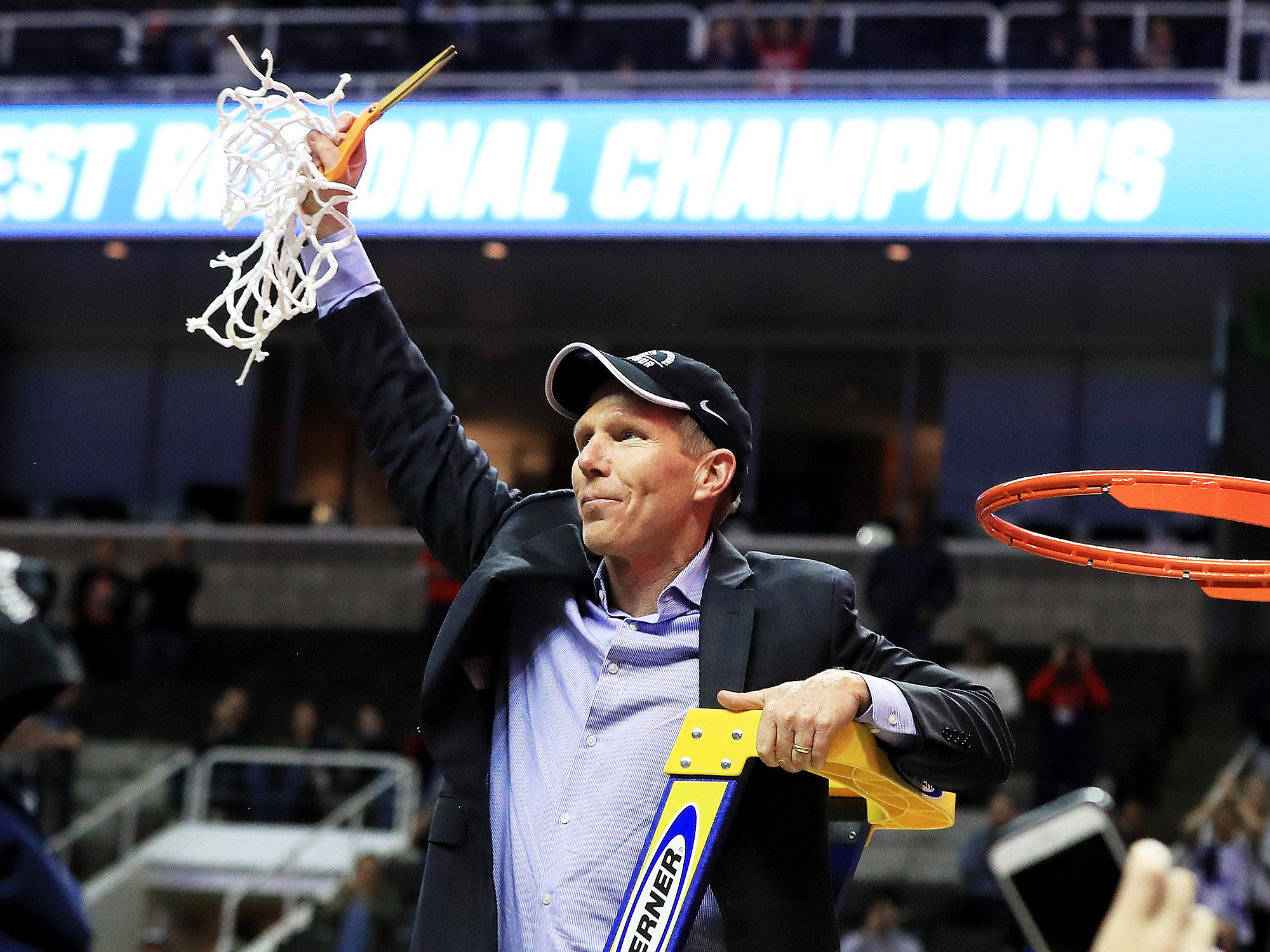 The Zags answered this statement with affirmations, and not in the manner of a team that believes it’s playing with house money as it heads to its program’s first national semifinal. The reality, for 36–1 Gonzaga, is that it entered this NCAA tournament as every efficiency-based analytic model’s favorite to win it all, and nothing has changed as it heads to Glendale, Ariz., to face either Florida or South Carolina in the national semifinals, with Oregon and either North Carolina or Kentucky on the other side of the bracket. Gonzaga has an elite, rim-protecting defense and the right mix of guards—with sophomore Josh Perkins and Williams-Goss and Mathews—to earn two more victories and a national title.

Santangelo, the former star-turned-Zags radio announcer, was working courtside for Saturday’s game against Xavier, and in warmups, he looked on at a different version of Gonzaga than he was a part of in the 1999 Elite Eight. “We were a pure Cinderella, with no frame of reference, too naïve to know we weren’t supposed to win,” Santangelo said. “This team—I’ve never seen them more comfortable in their own skin, feeling like they’re supposed to do this.” He was looking at a team that was favored by 8.5 points and expected to go to Phoenix—a team that, according to guard Silas Melson, had been talking about the Final Four “as soon as we got together in September—that was our main goal.” Even earlier than that, in summer 2016, when Mathews was looking into graduate-transferring from Cal to the Zags, he texted Williams-Goss about the type of team they might have, and the Final Four entered those discussions. “When we stepped foot on campus [this year],” Williams-Goss said, “we knew we had the pieces to do it.” 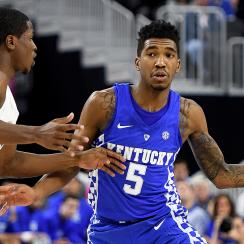 On Thursday in the Sweet 16, they had survived what Few described as an “absolute war” and a “rock fight” against No. 4 seed West (Press) Virginia, needing a go-ahead three-pointer from Mathews with 1:08 left and a gritty, defensive stop by Williams-Goss (with an assist from Williams) against Jevon Carter on the final possession to pull out a 61–58 victory. When they gathered in the locker room on Saturday before facing Xavier, Few told them, “If I would have told you guys [at the start of the season] that you were 40 minutes away from the Final Four, would you all take that?” Said Perkins, “We’d put in so much work [that] we would take that scenario 10 times out of 10.”

Freed from the hindrances of West Virginia’s bruising D, the Zags came out and blitzed Xavier, taking a 49–39 lead by halftime, and running their offensive efficiency up to over 1.40 points per possession midway through the second half. The Musketeers protected the interior, limiting behemoth center Przemek Karnowski and his backup Zach Collins to just four field-goal attempts each, but that freed the Zags for ample, long-range looks, and they shot 12 of 24 from deep. Even Williams, a reluctant three-point shooter from his power forward position, line-drived one in left-handed, and “When you see Johnathan Williams make threes,” Melson said, “everybody’s gonna start shooting.”

The Zags’ defense—the staple of their run to 36–1—did not desert them in the Elite Eight, holding Xavier to 35.5% shooting overall and just 2 of 16 from deep. And although Few has been reluctant to single out this 2016–17 team as his best ever—he’s said it would be like telling one of his children they’re his favorite child—he has acknowledged that this squad’s ability “to really, really protect the rim at a high level” is different than past years, and for the entire tournament, it’s held the No. 1 ranking in adjusted defensive efficiency on kenpom.com. 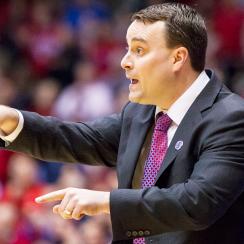 By late in Saturday’s game Gonzaga had so squashed No. 11 Xavier’s Cinderella(ish) run through the tourney, opening up a 20-point lead, that Few could safely remove his starters with 53.1 seconds left. One-by-one, they made their way to the bench, and Few and his assistant coaches embraced them. Few started tearing up as he hugged Williams-Goss—”absolute tears of joy,” the coach called them—and thanked the former McDonald’s All-American point guard for believing in the program when he transferred away from Washington two years ago. Williams-Goss finished with 23 points, four assists and zero turnovers against the Musketeers, but was beaten out for the West Regional’s Most Outstanding Player award by Williams, who added 19 points, eight rebounds and three blocks, and played superlative defense in both rounds. Few took Williams’s face in his hands after he came out, and thanked him, too, for believing. “They all took a leap of faith,” Few said of the transfers. “That’s what it is. It’s a leap of faith. They all had great options and they believed in the culture [of Gonzaga].” 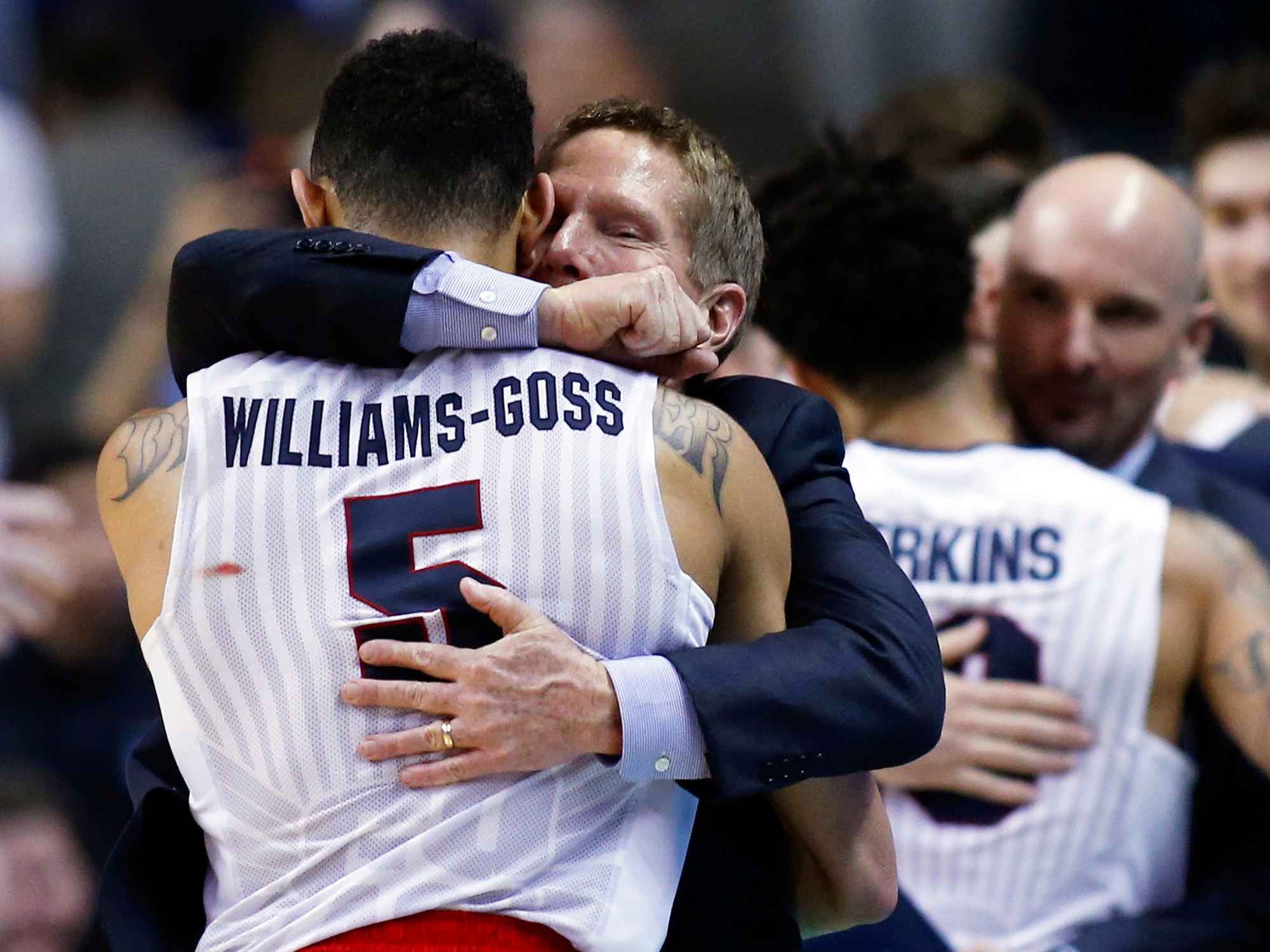 The culture of Gonzaga has evolved, from a tiny upstart to a team that flies charters to road games, has a Nike deal (instead of Spalding), an incredible winning tradition and a family atmosphere with staff members with deep ties to the program. As Few put it, when he first came to Spokane as a graduate assistant in 1989, “We won four Division I games. And I mean, this”—the Final Four—”wasn’t even possible. And each year we got better and better, and then we got really, really good.” And Mike Roth, the Gonzaga athletic director who arrived at the school in 1997, stood courtside on Saturday and told a fitting story about being in Phoenix for the ’99 West Regional, when the program was just bursting on the national scene. The day after the Zags upset Stanford in the Sweet 16, their staff was summoned to a “transition meeting” with the NCAA, where each of the Elite Eight teams were briefed on all the plans they’d need to make for the Final Four.

“It was us and UConn,” Roth said, “and we brought three people in polo shirts, and they brought 12 to the meeting, in suits. One of the committee members came up to me afterwards and said, ‘Hey, Mike, by the way, if you guys win, you’re going to need a lot of help.’ We just had no idea, then, what we were getting into.”

On Friday, Roth and his Gonzaga staff attended a transition meeting for the Final Four—and they rolled 10 deep. The program doesn’t need any help anymore. Few’s team doesn’t need any Cinderella magic anymore. It’s more than ready for what it’s getting into.

The Breakthrough: Its Cinderella days long behind it, Gonzaga at last reaches Final Four – Sports Illustrated added by on March 26, 2017
View all posts by →