By admin on March 3, 2017Comments Off on NFL Combine thoughts for the college football fan – Sports Illustrated

INDIANAPOLIS — If you’re a college football fan who cares not at all about the NFL, Thursday is your day. (Do these people exist? Hypothetically, these people exist.) Wednesday was all coaches and general managers, and we heard maybe a dozen times that really, this is a great quarterback class. But finally, on Thursday, the prospects appeared. Running backs and offensive linemen met the media, and special-teams players (four kickers, five punters and two long snappers) worked out. Here’s what we learned:

1. The new fan-friendly setup has some interesting consequences. (I promise I won’t use this space to whine about media access. Please read on.) Because fans are allowed to view prospects’ bench presses and press conferences, the media operation moved from the stadium into the nearby conventions center. Now, unlike in past years, players visit with the media in organized batches rather than wandering into the interview room in random waves. That led to more interviews at once, which led to Utah’s Joe Williams sitting alone at a podium, beat-boxing into a microphone.

With the public being granted access to the convention center’s hallways, where prospects walk from room to room, another interesting wrinkle appeared. To make sure no prospect was bothered by an autograph-seeker, convention center staff unfurled red cords that they held in the air on either side of each group of athletes, corralling them from one room to the next.

2. Between Leonard Fournette, Dalvin Cook and Christian McCaffrey, this spring’s draft will feature some of the biggest names from the 2015 college football season. Fournette still seems like the draft’s top running back despite a down year due to injuries in 2016, and on Thursday afternoon he drew the day’s biggest crowd at his media availability, where he said he doesn’t watch NFL running backs and never has. Fournette weighed in at 240 pounds, five pounds more than he did at LSU. That made him the heaviest running back in Indianapolis (and 74 pounds heavier than the lightest, Donnel Pumphrey, who’s also four inches shorter than the former LSU star). His upcoming 40-yard dash will be one of the combine’s most scrutinized. 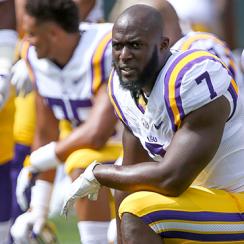 At his podium session, Cook talked about the recent success of first-round running backs, from Todd Gurley and Melvin Gordon in 2015 to Ezekiel Elliott in 2016, and how that should help this year’s deep class. “(The running game had) kind of devalued over a couple of years, and to get it back going, and for us to be peaking as we’re peaking right now as running backs, it’s a great feeling,” he said. This year’s draft could see several running backs in the first round; Fournette and Cook have shots at the top 10, and McCaffrey, Texas’s D’Onta Foreman and Tennessee’s Alvin Kamara could go in the first 32 picks. So after several years in which the best college backs never amounted to much of anything in the NFL, hope springs eternal that the recent trend will continue. If it doesn’t, blame the Browns.

3. James Conner showed up at the combine weighing 233 pounds and with a cancer-free PET scan from Feb. 23. The former Pitt running back said he brought copies of those clean scans to give to teams, and that as a result, his medical evaluation process has been not much different from anyone else’s. He did say a few coaches have asked about the scar on the right side of his neck, where one cancerous mass grew.

As for his weight, Conner said he feels most comfortable between 230 and 235 pounds. He played last season a bit heavier, at about 245 pounds, but he says he wants his current weight to be his playing weight in the pros, not just a temporary loss that could help his 40 time.

NFL Combine thoughts for the college football fan – Sports Illustrated added by admin on March 3, 2017
View all posts by admin →