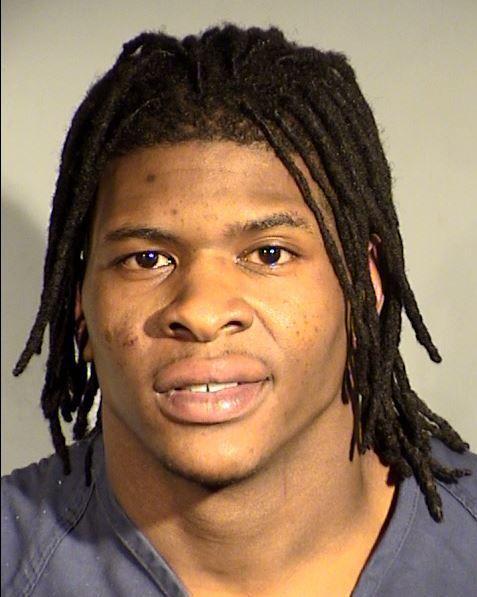 Former Baylor University football player Tre’Von Armstead was arrested Wednesday in Jefferson County on three second-degree felony sexual assault charges stemming from an alleged 2013 sexual assault while he was a member of the Baylor football team.

Jefferson County Sheriff’s Office authorities said Armstead, 22, was arrested at 9:28 a.m. near Port Arthur and remained in custody on three McLennan County sexual assault charges. Armstead was indicted last week, but the indictment remained sealed until after his arrest Wednesday.

He remained in custody Wednesday evening with bond set at $150,000.

The three charges in the indictment allege Armstead forced a woman to perform various sex acts without her consent on or about April 18, 2013.

In 2013, Armstead and former Baylor running back Myke Chatman were named in a police report alleging their participation in an off-campus sexual assault. No charges were filed at the time, and Baylor did not open an investigation into the case until September 2015.

It is unclear whether Armstead’s indictment is related to the incident that led to the 2013 police report.

Chatman transferred and played football at Sam Houston State University for the 2016 season, which was his senior year. He has not been arrested on any criminal charges.

In January, Armstead and Chatman were named in a Title IX lawsuit that alleges Baylor did not stop a culture of sexual violence that included 52 rapes in four years. Victims said Baylor Title IX officials, Baylor police and then-President Ken Starr did not respond to sexual assault claims.

Armstead is the fourth former Baylor football player to be indicted on sexual assault charges since 2012.

Tevin Elliott and Sam Ukwuachu both have been convicted of committing rape, and Shawn Oakman, a member of the 2015 team, is awaiting trial. Ukwuachu is appealing his conviction.

Last week, Armstead was also arrested in Las Vegas on charges of domestic battery, resisting arrest and breaking or damaging a police vehicle. The arrest came after Las Vegas police reported witnessing a disturbance involving Armstead and a woman in front of a hotel on the Las Vegas strip. He kicked out a window in a police car before he was taken to jail, Las Vegas police said at the time.

Armstead, who was named an All-Big 12 tight end in 2014, was suspended for all but the first game of the 2015 season. He was later expelled from Baylor in the spring 2016 semester, by which time the school was mired in an ongoing sexual assault scandal.

Starr was removed as president and Art Briles was fired as head football coach in May amid fallout from the scandal. Former Athletics Director Ian McCaw was also sanctioned and placed on probation before he resigned days later.

Baylor’s board of regents released a 13-page “Findings of Fact” document based on a nine-month investigation by Philadelphia law firm Pepper Hamilton into the school’s handling of sexual assault allegations. The document reported details of a “fundamental failure” by the school to adequately respond to sexual assault claims and a football program that operated “above the rules.”

Since 2011, 17 women have reported sexual or domestic violence against 19 Baylor football players, including four gang rapes, Baylor regents have said.

Baylor is facing six Title IX lawsuits, and Pepper Hamilton faces a negligence and defamation lawsuit filed by former athletics staffer Tom Hill, who was also fired during the sexual assault fallout. The university has reached at least three settlements with sexual assault victims, as well.